Like many others, we first saw Copped Hall when travelling on the M25, and were fascinated by it – we kept hoping that “someone” would come and look after it, and were really pleased when we saw that “someone” was starting to restore it. So over the years we watched as the mansion started to recover, but it wasn’t until about five years ago that we heard of an Open Day and went along to see what was happening for ourselves.

We wandered around the mansion/building site, were stunned by the walled garden, and fell under the spell of the house immediately.  We joined as Friends of the Trust on that same Open Day and went back for a guided tour (with Phil) soon after.  It wasn’t long before we started helping out on the Stuffing Party mornings, filling envelopes with newsletters, and persuaded several friends of ours to come along to Open Days to see for themselves.

We got to know other volunteers, chatting over coffee in the Racquets Court, and gradually got to know more about them.  Graham met up with Peter from the Lift Team, who he had known as a supplier to his work, and Linda found that both she and Thea had been nurses at The London Hospital at the same time in the 1970s.

But somehow we eventually got talking to Vic and found ourselves offering to do more.  Linda said she would love to be a tour guide, and was quickly snapped up for training by Sylvia, and Graham enjoys working in the garden near to the house.  Graham seems to have been designated a proficient strimmer, so can be seen strimming the grass and weeds around the house and in the Walled Garden on the weekends we have available.  Graham sometimes gets asked when he is going to retire, which we guess is because it is hoped he can put in more hours at the mansion.

After the training, (and having read Sylvia’s book several times), Linda now enjoys  participating in the Guided Tour mornings, and has done a few private tours as well.  Graham has now been adopted into the Gate Team and takes the money at the sentry boxes.

More recently we have helped out on Open Days – Linda as a steward in the mansion, Graham as “Traffic Manager”.  We put out signs, parked cars and took tickets on the jazz evening and Linda dressed up as a waitress for the afternoon tea event. We have also done sentry box duty on Garden Afternoons and Open Days, and we look forward to taking part in many more events in the future. 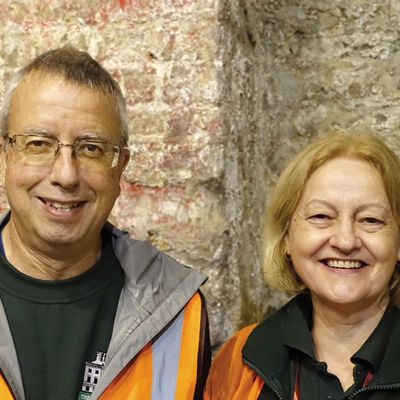