Sandy and I first became aware of Copped Hall in the 1980s, some years before it was acquired by the Trust.  We used to bring our (then very young) children to walk and play around the west garden.  We always wondered what the history of the place was, why and how it had become abandoned and derelict, and what it was like inside.

Later, having heard that the house had been bought by a Trust, and was to be restored, we jumped at the chance to come on a tour and learn more about it.  As I recall, Peter Dalton was our tour guide, and we found it absolutely fascinating.  I think that there and then, we both decided, independently of each other, to become involved in some way.  However, this wasn’t possible for some time, as I was still working and our children were still at school, sweating over GCSEs and then A levels, though we did become members of the Friends of Copped Hall, and Sandy became a Sunday regular.
Her main interest was in the gardens.  She has always been a keen gardener, and our ‘postage-stamp’ size plot in Walthamstow doesn’t really offer her enough scope.  One look at the four acre walled kitchen garden, and she was hooked!  My principal focus was the history of the house and the wider site.  History has always been one of my interests, and I wanted to learn more about Copped Hall’s rich and varied past, and harboured ambitions to be a tour guide.

In 2005, I retired and was able to become more involved.  I did become a tour guide, thanks to lots of support from Sylvia, Maggie and Nicola, and Sandy is now a key member of the garden team.  I, too, put in a stint in the garden most Sundays.  Fresh air, exercise and good companionship – I can thoroughly recommend it.  You don’t even need to be an experienced gardener. My own horticultural expertise remains woefully inadequate. But I can wield a spade and push a wheelbarrow, and there is always someone more knowledgable to advise me on which are the weeds and which are the onions, carrots, or flowers!

Sandy has become quite the entrepreneur ( or should that be ‘entrepreneuse’?), working with the garden team to produce an extensive range of plants for sale to visitors, raising money for the garden – over £2000 last year.  Her sales technique is all but irresistible.

I have also, late in life, added another string to my bow – plasterer’s labourer.  Most Thursdays I come along with David, our volunteer plasterer, and do the mixing up for him.  So, thanks to us, there is not as much bare brick in the interior of the house as there used to be.

Our involvement with Copped Hall has enriched our lives in so many ways - physically, intellectually and socially.  Come and join us, and let it enrich yours. 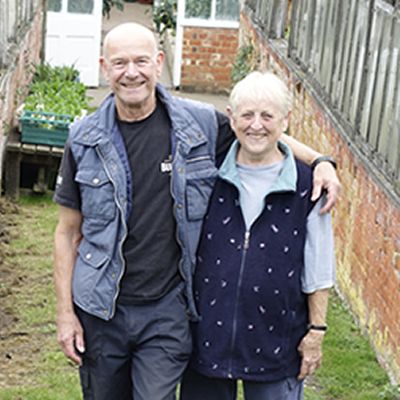